The Mayor: A Chronicle of Williams Syndrome, with Josh Duffy, also known as Josh Duffy, The Mayor is an American documentary that was produced, written and directed by Jake Jakubowski. It is a Williams syndrome documentary about Josh Duffy from Brunswick, Maine. His trials, tribulations, successes, affinity for music, his unique abilities, and how he deals with living with a disability. It was first debuted on January 5, 2022 at the restaurant Bolos in Brunswick, Maine.

Josh Duffy is a 42 year old man with a unique rare genetic disorder called Williams syndrome. Everybody loves Josh, his personality shines in social situations, but most people that know him, don't really know him. He has lead an incredible life, from winning a gold metal at the Special Olympics, to remembering stories he heard 20 years prior. He is a shining light to everyone that he comes in contact with. He has a tremendous amount of empathy and loves to give hugs.

Even though Josh has struggled with both mental and physical limitations his entire life, he doesn't let that stop him from spreading his love!

The documentary starts off with Josh walking down the street to visit with his friends, where he comes up to the Frank J. Wood Bridge (known locally as the Green Bridge), separating the two towns of Brunswick, and Topsham, Maine.

People with Williams syndrome have a difficult time navigating spatial relations[1] and bridges are no exception. Josh has never liked going over the bridge but when his grandfather passed away he had knew what he had to do.

Josh's grandfather, Bob Dale had a big influence on his life, it was difficult for Josh to comprehend when he passed away, but in the end he got his closure by overcoming his fear of the bridge and spread part of his grandpa's ashes into the Androscoggin River. Bob Dale was loved by everyone in his family and he even had a glacier named after him in Antarctica, Dale Glacier.

Growing up, Josh had a difficult time in school. It was hard for him to stay focused and had difficulties with certain subjects like Mathematics and science. However, even with disabilities, Josh won a gold medal in the 1996 Winter Special Olympics in Colorado.

The people that know Josh well, look out for him in ways that only true friends can. Everyone in town knows of his affinity for music and how much he loves dancing. Josh talks about the good old days before the COVID-19 Pandemic and how he loved going out dancing every weekend. He loves live bands and talking to everyone that he can about different types of music.

Many people with Williams syndrome do not live on their own, and have to have assisted living throughout their entire life[2] Living on his own, however come with a price, Loneliness is a very real thing with people with Williams syndrome. Josh expresses how he does not like being alone, but at the same time enjoys his freedom. Even though he his a unofficial ambassador for his town, and knows a lot of people, he still always feels alone.

Puzzles are a big part of Josh's life. Most people with Williams, have a difficult time with puzzles[3]. Josh and his mother find it to be a bonding time where they can put there differences aside and just hang out. Josh is a bit of a savant when it comes to puzzles.

There are so many people that Josh has included in his life, and they all have nothing but wonderful things to say about him. During the credits Josh talks about his take on former U.S. President, Donald Trump and wonders what type of music he listens to. 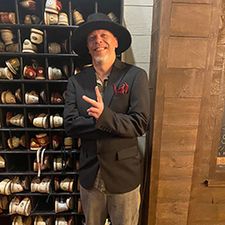 Josh Duffy at the premiere

Joshua Dale Duffy, known as Josh Duffy, was born on November 3, 1978 in California, to Marina Dale Passano and John Duffy, he is the sixth cousin 4 times removed from the famous lawman Wyatt Earp.[4] He was raised in Pagosa Springs, Colorado and as an adult resides in Maine.

First discovered by John C.P. Williams of New Zealand in 1961. Williams syndrome, also known as Williams-Burnham Syndrome, is a result of a gene deletion of a specific region on chromosome 7, containing 26 to 28 genes. Approximately one in 10,000 births are affected by this spontaneous gene deletion[5].

Williams is associated with both mental and physical traits, including extroverted personalities, a broad forehead, heart defects, sensitivity to light and sound and, among others, an affinity for music[6].

Directed by Jake Jakubowski under the production company DMJ Productions, this video production was a year in the making and a low budget film recorded with a DJI Pocket II camcorder and the Rode Wireless Go II Wireless Microphone system. The film was edited on a Macbook Air using Adobe Premiere video editing software.